Posted at 13:13h in Thoughts on... Typography by Denielle

Considering our discussion about logos, identities and the Arabic/Latin translation issue(s) on Wednesday… What are your thoughts on the Dubai International Airport logo? Do you agree with the assessment of the logo design (found below)? or do you Disagree? and Why? What do you think about the fact that there is no Arabic included in the logo? What does this say about the airport and the intended audience?

UnderConsideration says this about the logo redesign:

“In November of 2007 — sorry we are late on this one — His Highness [sic] Sheikh Mohammed bin Rashid Al Maktoum, Ruler of Dubai [sic], unveiled the new identities for Dubai’s airports, the existing Dubai International Airport (shown above) and the future Al Maktoum International Airport which will be many times larger than its counterpart and be part of Dubai World Central. The sphere object is downright beautiful and feels unique to Dubai as a pinnacle of progress, excess and exuberance. It feels expensive, global and forward-looking, everything that Dubai seems to embody. Unfortunately the same can’t be said for the typography which feels like the ugly cousin of Dax (it of UPS logo fame) and is oddly positioned from the logo — but it’s small enough to be inconsequential to the graphic. Both airports are architecturally branded under a Dubai Airports logo which is equally nice. Overall, this is a great execution for a city that wouldn’t take anything less.”

The Ministry of Type says this about the logo:

There’s something oddly old-fashioned about the choice of typeface and color too, like something from the late 1980s. I’d prefer to see either the word “Dubai” or the airport identifier in a different weight, or black (instead of grey), or something – anything to give the type some life. I’m not sure about the face – it does look a bit like the Emirates logo, and I’m interested to see that there’s no Arabic version of it too. Changing the positioning of the type, as below, focuses attention on that center of the center-of-things pattern and would look even better in Arabic right-to-left lettering – in my ever so humble opinion, naturally: 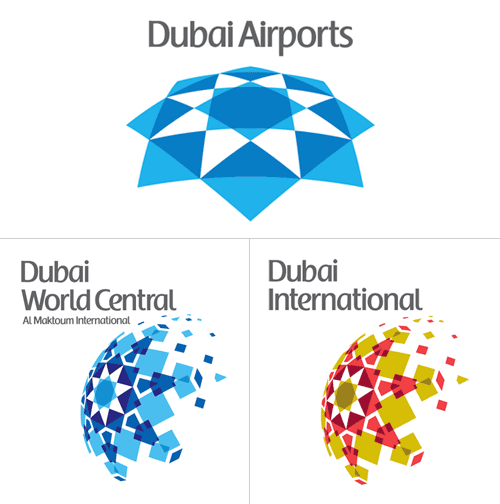